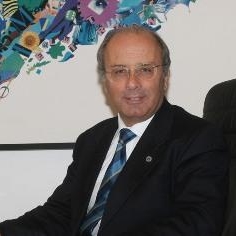 Unesco Transdisciplinary Chair on Human Development and Culture of Peace

In 2006, he was appointed Chairholder of the Transdisciplinary UNESCO Chair on Human Development and Culture of Peace and in 2012 was declared Professor Emeritus of the University of Florence. Currently, since 2018, he is Head Professor of Education of the Telematic University Giustino Fortunato of Benevento (Italy).

His main research area, deepened with experiments and consolidated over the years through theoretical studies and field works in local and international cooperation, is focused on the transdisciplinary model of educational processes. The model is studied in its epistemological and scientific basis and in its strategic and methodological options, aimed towards the transdisciplinary science of education in the historical transition towards the Terrestrial Humanism of a Sustainable Civilization.

The model is based on the complex theory of the potential of the sensory-motor, emotional and rational knowledge and it aims to develop creative processes of individual social and cultural advanced intelligence, related to the intangible and tangible qualitative co-growth of the communities in the territories, usually, for the most deprived groups and subjects. The model is experimented with in the scientific and professional work on Complex Human Development, Creating Knowledge Paradigms beyond violence, Transdisciplinary Participatory Action Research, Lifelong Learning Strategies, Politics and Institutions of formal, unformal and informal Education. The operational framework is the Network of Community Education, within which the different educational agencies, operators, and services interact in the wider context of Local and Global Development for quality of environmental, social and, individual life.

Memberships in Scientific and Professional Associations

Professor Paolo Orefice has also been involved in national and international associative activities in the educational field as a member of executive bodies and, occasionally, as a founding partner of scientific associations and national (e.g. AIDEA, AIEC, SICESE, SIPED, EDAFORUM, UNESCO National Commission) and international (e.g. ICAE, ICEA, CESE, WCCES) organizations. He has also been a member of the Administrative Board of the Amburg UNESCO Institute for Lifelong Learning. He is currently in charge of the coordination of the Italian UNESCO Chairs (Group 1).

Professor Paolo Orefice has extensive experience in directing and managing scientific projects in local, national, European and international cooperations, especially in the Latin American and African areas for the human development and culture of peace.

Here is a list of the most significant research, education, and development projects during his time as director of the UNESCO Transdisciplinary Chair (in 2006) and before.

Book of the UTC

A selection of over 400 publications in Italy and abroad

Creation and development of the complex model of education

Publish modules to the "offcanvas" position.